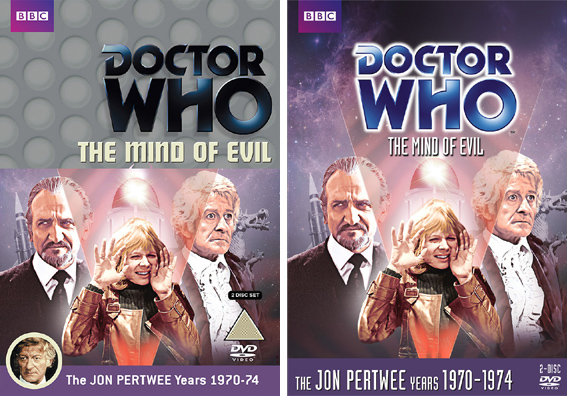 I have now completed my colourisation work on episode one of The Mind Of Evil for the official DVD release of the story, commercially released in the UK on 3rd June 2013 (Region 1 released in the US & Canada on 11th June and Region 4 in Australasia and South America on 5th June). It had previously only existed within the BBC archives as a black & white telecine film print.

I was the sole colourising artist working on the episode. The following five instalments of this six-part serial were restored using the Chroma Dot colour recovery process developed by Richard Russell and the Colour Recovery Working Group. However, these chroma dots had been filtered out of the first episode which necessitated manual intervention to re-colourise the story.

I first became involved in the venture in 2009, when I produced a one-minute colourised test sequence in collaboration with James Russell (one of the founder members of the Doctor Who Restoration Team) to assess the viability of completing the episode. I produced all the colourised key frames required for the test and James interpolated their colour signal – a part manual, part motion-estimation process that extrapolated the colour from my key-frames across adjacent frames of black and white video.

It was two years later, in 2011, that I was approached by the Doctor Who Restoration Team and formally engaged as the colour artist for part one.

To tackle the episode, it was broken down into its 205 constituent shots. These shots were then broken down further into individual “key” frames which I had to manually colourise with Adobe Photoshop, using the other colour-recovered episodes as a reference guide to costumes, sets, locations and lighting.

The colourisation process itself was entirely manual, using a brush tool to apply colours directly on to each TIFF image without the use of matts or masks or working in layers, rather like painting a watercolour. The work necessitated a steady hand, a keen eye and an aptitude for consistency across the frames! 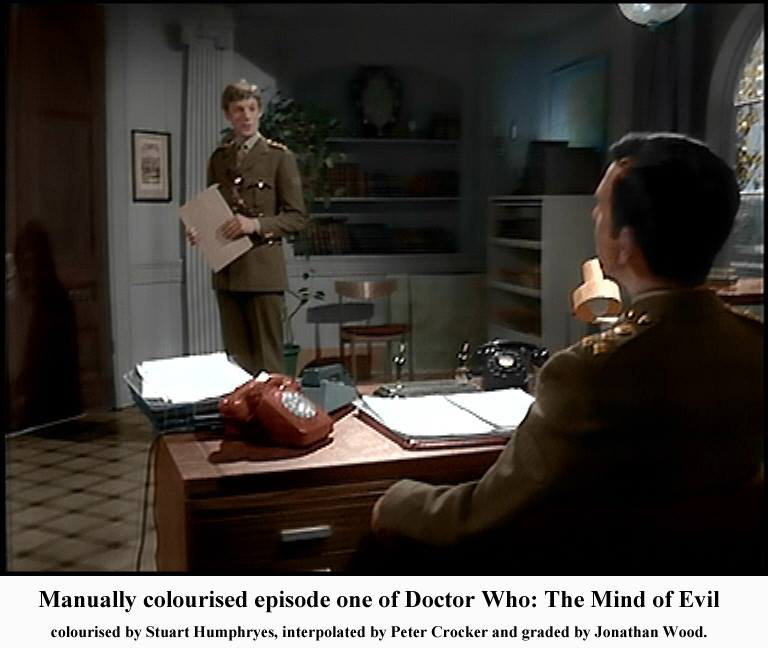 As the UK’s PAL video system consists of 25 frames for every second of video footage, a 24-minute episode of Doctor Who contains about 36,000 frames. However, it was not necessary to colourise each one individually! The process involved me manually colourising approximately every 5th frame. It was a laborious process over several thousand hours, taking particular time and care to concentrate on recreating convincing skin tones, eyes and hair. The first frame of each shot, establishing the colour palette for each element, was always the longest to produce, generally taking well over an hour on that single frame. Shot 93 alone took me about 90 hours work to colourise.

Once the key-frames for each scene were completed they were then utilised by SVS Resources (who had taken over the role of interpolation from James Russell) to extrapolate the colour signal from the key-frames across the adjacent monochrome frames. The results were then graded, undistorted and Vidfired.

Due to the thousands of man-hours involved in bringing episode one back into colour it became apparent, two-thirds of the way into the venture, that the tight deadline would require additional resources to be brought into play. Peter Crocker of SVS Resources therefore began assisting through the closing months to meet the delivery date. I continued to produce all the “primary” colour key-frames as normal, but extended them to approximately every 20th frame. Peter was then able to lift the colour from my primaries and transplant it onto secondary in-between frames. This way we met the tight deadline without compromising the quality of my colourisation technique.

All-in-all, about 7,000 frames were hand-colourised for the project. Two shots from my original test sequence (which had been motion-estimated by James Russell) were utilised in the finished episode. I attended the grading session at BBC TV Centre on 27th January 2013.

Details of my other colourisation work for the BBC Doctor Who DVD range can be seen here: Terror of the Zygons and here: Genesis of the Daleks 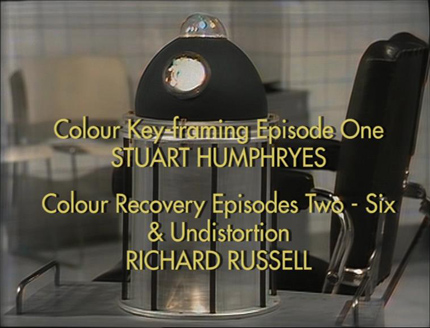 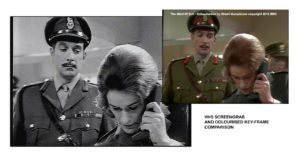 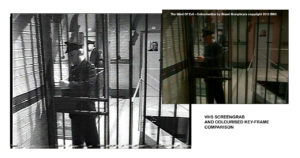 NEWS FLASH: The re-colourised Episode One is to be televised on the American broadcaster Retro TV on 15th October 2014.

The re-colourised ‘Mind of Evil’ was premiered to very generous reviews at a special screening at the British Film institute, South Bank, on Sunday 10th March 2013. I was invited as a guest to appear on a restoration Q & A panel to answer questions about my work colourising episode one. The ‘Radio Times’ review of the BFI event, along with other reviews of the colourisation work,  can be read here: REVIEWS

The work was also be screened at The Electric Cinema in Station Street, Birmingham on Saturday 30th March as part of the Flatpack Festival

A special screening of the re-colourised serial, introduced by Doctor Who script editor Terrance Dicks, also took place on 18th April as part of the Belfast Film Festival

Various clips of my colourisation work on episode one were televised on the BBC evening news on 12th June 2013! A short excerpt is viewable on the BBC News site here

The ‘BFI Gallery’ button below is a link to a gallery containing photographs from my appearance on the BFI’s Restoration Panel, which featured Peter Crocker (Video Restorer), myself (Colourising Artist) and Mark Ayres (Sound Restorer) plus snaps of my autograph signings for fans after the event. (Photographs kindly provided by attendees Chuck Foster, Emrys Matthews, Richard Unwin, Dawn Eggleton and Richard Lamb).

Give the Gift of Babelcolour
3
3
Shares
MENU